The frill canary bird, also called the crested canary, is a beautiful bird that is very popular as a pet. These birds are known for their frilled feathers around their head and body which give them a very unique and elegant appearance. Frill canaries are also known for being very good singers, and they are often used in competitions.

Canaries were originally bred in the Canary Islands, which is why they are named after these islands. These birds were then brought to Europe in the 1500s, and they quickly became popular as pets. Canaries were first bred for their singing ability, but over time, they have also been bred for their appearance. There are now many different types of canaries, all with different colors and patterns.

If you are thinking about getting a frill canary as a pet, there are a few things you should know. First of all, these birds need to have plenty of space to fly and exercise. They also need a diet that is enriched with vitamins and minerals to ensure their health. Additionally, frill canaries need to be socialized from a young age so that they do not become scared or aggressive. With proper care, frill canaries can make wonderful pets that will bring joy to your life for many years to come. 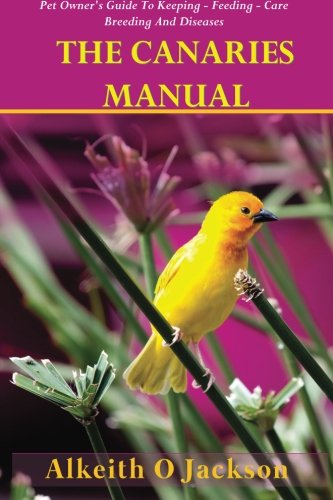 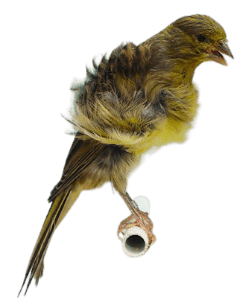 The frill canary bird, is a type of domesticated canary that is bred for its frilled head and plumage. This plumage is the result of a genetic mutation that originally occurred in wild canaries in Africa and was then selectively bred by humans. The frill canary is not a separate species from other canaries; rather, it is a variety of the common domestic canary (Serinus canaria domestica).

Frill canaries were first bred in Europe in the 19th century and quickly became popular as pets and show birds. They are still kept as pets today, although they are not as common as other types of canaries. Frill Canaries are generally healthy birds with few health problems. However, like all animals, they are susceptible to certain diseases and conditions.

The frill canary bird is a small songbird with distinctive plumage. The result of a genetic mutation, this plumage gives the bird a “frilled” appearance. The frills are longest on the sides of the head, body and get progressively shorter towards the back. The rest of the bird’s body is typically yellow or cream-colored with brownish streaks. Male and female frill canaries look very similar; however, males usually have larger frills than females.

Frill canaries are bred for their distinctive looks and are also used for singing competitions like other types of domestic canaries. However, they are known to be good singers and will often sing spontaneously during the day. Like all canaries, frill canaries are social birds that enjoy spending time with their owners and other birds. They require a bit more care than some other types of pet birds, but they make up for it with their playful personalities and beautiful plumage. 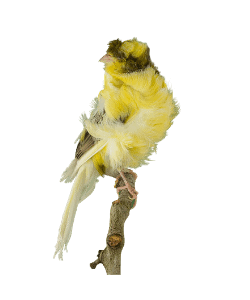 There are two types of Frill canary, the Border and the Inland. The Border Frill is the more popular of the two and is further subdivided into three types – the Scottish, Irish, and English. The Inland Frill is not as often seen in shows but is very similar in appearance to the Border Frill.

The Frill canary bird is a relatively new type of canary, having only been around since the early 1900s. It was developed in England by crossing various types of canaries, including the North Pole canary (now extinct), Crested canary, German Roller and Gloster Fancy. The aim was to create a bird with attractive frilled head feathers, and this was eventually achieved.

The breeding of the frill canary bird is same like other canaries. However, all frill canaries may not have same traits to breed or allow in breeding setup. Like all frill male canaries or female don’t show the signs of mating like singing of a male canary aggressively and call of the female frill canary for mating.

So, in such cases, it’s advised to allow adult frill canaries some space and time to understand and mate with each other. Overall, the breeding of these canaries is simple like other canary birds. 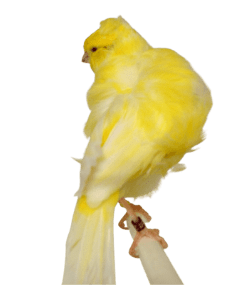 As canaries are known for their beautiful singing. Likewise, Frill Male canaries are the singers of the species and they will sing to attract mates and to mark their territory. Frill Canaries are able to learn to whistle tunes and they will often mimic sounds that they hear in their environment. If you want a canary that is a good singer, it is best to choose a male bird.

Persian frill canaries are very famous for their singing and they are even bred and prepared for singing competitions. Besides beautiful plumage, the singing of these birds is outstanding and the pet owners love these birds.

Frill Canaries are generally healthy birds, but there are some health concerns to be aware of. These include colds, canary pox, fungal infections, and heart disease.

Colds:
Colds are the most common health problem in canaries. Symptoms include sneezing, runny nose, and lethargy. Colds can be fatal if not treated promptly.

Canary pox:
Canary pox is a virus that affects canaries. Symptoms include lethargy, poor appetite, and difficulty breathing. Canary pox can be fatal if not cared for properly.

Fungal Infections:
Fungal infections are relatively common in canaries. They can cause respiratory problems and skin irritation. Fungal infections will also be deadly for your canary if properly not cared.

Frill Canary Bird As a Pet: 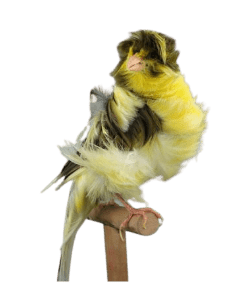 Frill canaries make good pets, as they are not too demanding of your time and attention. They are also fairly low-maintenance birds, requiring only a simple diet and a clean cage. If you are thinking about getting a frill canary as a pet, it will be a good choice.

Frill canary birds are very companions and beautiful. They love human interactions and don’t hesitate to be around social gatherings. Their singing quality and frilled plumage with a beautiful cage increase the beauty of your home and surrounding.

I suggest that frill canary bird will always please you if you opt for it as a pet bird. You won’t regret it in the future because it’s one of the outstanding breeds of the canary community.